My name is Kyle and I am the guy that spends the most time with Carl building here at Pursuit Cycles. In today’s post we will be covering the thing that makes up the majority of your bike. Carbon fiber. Around 60% by volume, epoxy, the remainder is something that we will talk about in the next blog post. After the epoxy post I will be writing the last of this 4 part series on potential new material technology in bicycles. But, in this post I will focus on the nuances of selecting carbon fiber for frame design.

The selection of a fiber is more complex than choosing the highest modulus or strength fiber to deliver an exceptional ride. This requires a balance, just like trying to balance how many bikes I can fit into my apartment without clutter. Current count is 8. That ride balance is primarily dependent on the fibers and their layup. This process requires understanding the selection, categorization, and behaviors to make the seatstay and chainstays below.

There are 15 manufacturers of carbon fiber producing at scale. Each company has a product line spanning a number of fiber types and three major forms. The most common form of carbon for bicycle frames is a PAN (Poly-acrylonitrile) pre-cursor carbon fiber. The world’s largest carbon producer ,Toray, has 13 unique PAN fibers in a total of 32 forms with exciting names like T-300, and T-700SC. My bet is they didn’t hire a naming team.

Although a fiber may be produced by a number of suppliers the general characteristics of the fibers are described universally. A PAN fiber is mechanically characterized by its strength, stiffness, and elongation at failure. Other important characterizing features of a carbon fiber are the filaments per tow and the sizing. The most common application of a fiber is for its mechanical strength, but other applications rely on other unique properties of carbon. MRIs commonly use carbon for its non-magnetism and strength, which is the same type used in bike frames and F1.

A Roadmap of Fibers Properties

Now moving onto the fibers themselves, I will briefly describe some key details carbon fibers with respect to fiber coatings and packaging. Then, I will characterize a fiber by its mechanical properties and show the relationships that fibers obey. Finally, I will discuss hybrid fabrics and their continued growth in bike frame design.

Sizings are protective coatings that aid bonding. They are found on all fibers including the cotton of your favorite t-shirt. If a sizing is applied too thick it makes the fibers difficult to process. Over-sized fibers are described as “ropey”, and conversely when a sizing is applied too thin the fiber will abrade on the handling equipment and “fuzz”. This balancing act is carried out in processing labs for each carbon manufacturer and is dependent on the fibers end use. For fibers destined for bikes around 1% by weight is applied to the carbon. These recipes, like your grandma’s, are closely held secrets. But, I’m pretty sure there’s no cinnamon in your frame.

A tow is a package of fibers ranging from 1,000 fibers (1k) up to 50,000 fibers (50k). As all things must be processed this is why these 10 micron fibers are bundled into tows.  All fabrics, even unidirectional material, is made of these discrete tows, processed from hundreds of bobbins. 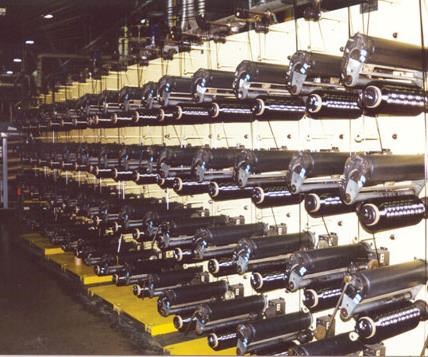 The number of fibers per tow play an important role in the selection of carbon fiber from a cost, handling, and quality standpoint.  Quality will generally be higher for a lower number of filaments with the cost being reflected in the lower throughput. Imagine pulling on 1,000 ropes while simultaneously heating each one of these ropes in an oven compared to doing the exact same for 50,000 ropes. Now do this on scale 24 hours a day for something that is less than the size of a human hair. 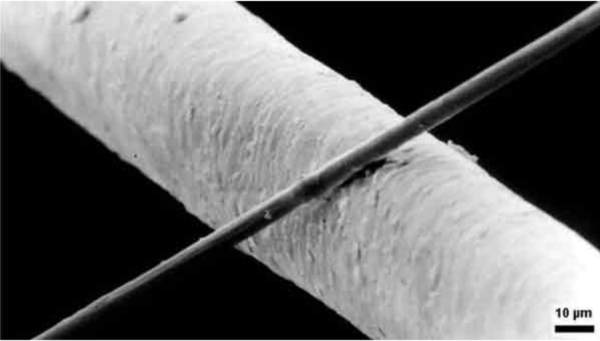 Stepping away from the secondary characteristics to primary factors in fiber selection lets look at mechanical properties. First, fibers mechanical properties are tested and published in tension. Think of a fiber’s strength and stiffness as those of a small rope. The strength and stiffness of a fiber follows a loose inverse relationship. Fibers are classified into four categories; standard modulus, intermediate modulus, high modulus, and ultra high modulus fibers. In general, the stiffer the fiber, the weaker the fiber is. This is a relationship to the time spent in the carburization oven think about pencil “lead”, elemental carbon, compared to charcoal, which has a lower carbon content of ~80%.

Fibers from Toray and Mitsubishi are plotted for their strength and stiffness below. The differing colors indicate the overall elongation at failure. Green represents an elongation at failure greater than 2%, blue 1.5% to 2.0% elongation, and orange <1.5%. Those fibers way up in the top at over 7000Mpa strength and 300Gpa modulus just came out only a few years ago and represent a major advancement in fiber production. 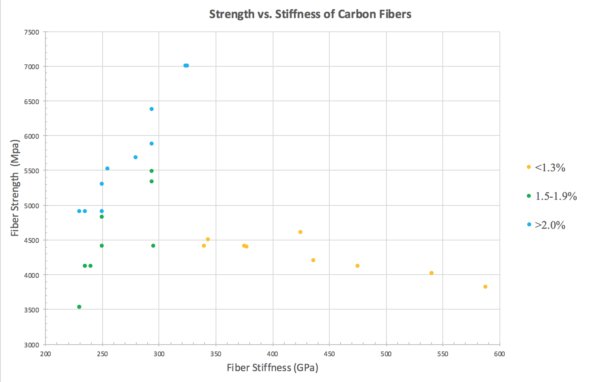 Additionally fiber’s costs per lbs are non-linearly proportional to their performance. Standard modulus fibers are a fraction of the cost of intermediate or high modulus fibers. Higher modulus fibers spend considerably more time being converted to pure carbon in an oven at 2000C in an oxygen-free environment. This may be critically limiting for 500,000lb airplanes, but not as critical for high end 2lb bike frames. Additionally, some fibers are not exportable under strict export laws.

So when choosing a fiber for a frame design, code is run and iterated on preliminary designs. This initial data is used to maximize all three values of strength, stiffness, and weight. Nothing new for the design world, but it does require thought and understanding of how fiber properties all come with a tradeoff.

Other fibers used in bicycles

Finally, it is also important to discuss hybrid fibers in relation to bicycle frames. These are fibers of different types that are mixed together in a weaving or stitching process. Most typically a polymer is integrated such as aramid (Kevlar), or spun olefins (Innegra and Spectra) to improve impact strength. Fiberglass and metals are also finding use for this same purpose, but have to be more diligently used for their properties because of their high density. These  multifunctional hybrids, optimized for multiple design criteria, use will continue to grow and can be found on a number of bicycle products.