This is my 3rd installment of the four part series on carbon fiber composite materials. This one is on the matrix that holds it all together. Previous posts talked about making raw carbon, and how carbon is used in bicycle frames. And in the final installment of this 4 part series I will go all blue-sky wanderlust on emerging tech in the composite industry and yeah there is some cool stuff out there. To quote The Graduate “one word: plastics… there's a future in it”.  However, this post is about the matrix holding all that carbon goodness together. This is the stuff that is often overlooked in terms of marketing because it doesn’t sound as sexy as ultrahigh modulus aerospace grade carbon. However, without this critical part your bike would be an unrideable ball of fabric and tows. My personal experience with a composite bond failure was when my bottom bracket shell started debonding from a frame I rode years ago, it sucked.

An epoxy system consists of an Epoxide (part-A) and a hardener (part-B). Epoxies in bikes are typically cured at elevated temperatures to give the frame its shape and form. Below is one of our parts showing the epoxy bleed out from the curing process. Some room temperature formulations exist, but are designed for marine use and repairs.

A seatstay showing epoxy bleed from the curing process. All carbon fiber bike frames today are made of some variant of an epoxy matrix system. This is because the properties of this sub-class of polymers fits the needs of a bicycle frame design. Epoxies are a thermosetting exothermic condensation reaction. This means that the two parts (part A and part B) must be mixed at precise ratios, they are not reformable after curing, and give off heat during their reaction.  Below is the structure of an epoxy, fig.1, and a polyethylene, fig. 2. Notice the network of links in the epoxy. These are called crosslinks. These crosslinks give the epoxy its stiffness and strength but also makes some formulations brittle. This crosslinking property can be controlled through chemistry alongside the impact resistance through the use of additives mixed in with the epoxy. The most commonly used impact modifier is rubber. The number of crosslinks are a primary factor in determining epoxy properties. When an epoxide group (part A) and an amine (part B) are mixed and supplied with sufficient energy they initiate cross-linking reactions. For an exciting page turner and scintillating dinner conversation I recommend the light read on epoxy formulation by Petrie.

Fig 1. A cured epoxy structure with a high number of crosslinks increasing the overall networks stiffness On the other hand polyethylene does not have the same number of crosslinks. It can stretch a significant amount, some blends can stretch between six and seven hundred percent. This linear network is why water bottles and other hollow containers are made out of polyethylene or its cousin polypropylene. Also side note; I’ve lost count on how many hours I've spent watching YouTube manufacturing videos. 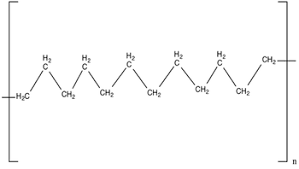 How epoxies are used

Getting back to epoxies lets focus on where else they are used.  There are a number of manufactures of epoxy systems.  One of the manufacturers is Huntsman out of Texas. They supply a number of systems for applications ranging from multi-ton wind blades to high performance hockey sticks. These systems are both epoxies, but have significantly different design requirements. The wind blade must be economical, fatigue resistant, and cure at a temperature to avoid thermal runaway. The hockey stick must be able to handle the impacts of the puck and the stick, and other hockey things. Each of the systems are tailored to suit a need like those on a bicycle. Bicycle frames are somewhere in-between the extremes of the cases above. On one hand the epoxy must absorb and transfer enough energy to survive impacts (additives and lower crosslink density), but the epoxy must also be high enough performance to withstand load cycling from well … cycling (higher crosslink density). In brief; formulations for bikes are made by scientists at labs of the large epoxy companies and then quantified by expensive analytical equipment to determine curing parameters. This dramatically simplifies the process of choosing systems for carbon bikes. These curing parameters are defined in such a way that the improper application of heat or curing pressure will significantly affect the end product, the bike frame. With incomplete cure seriously affecting the quality of the epoxy in the frame. 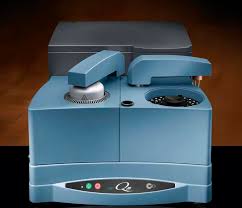 An example of an expensive analytical piece of equipment, a TA instruments DSC system

How the process is controlled

To make sure that a mis-cured part never goes on a bike the curing process is monitored through the insertion of thermocouples and pressure sensors into the tooling. These sensors qualify the curing process to ensure that enough energy has been input into the part to cure and compact the pre-preg. This curing process takes time. Some systems designed for space require a 6-10 hour cure per part to avoid thermal strain and control the coefficient of thermal expansion (CTE) for the rigors of orbiting the earth. The ISS experiences 16 orbits a day and a sunrise and sunset every 92 minutes! That’s 5 miles a second. I’m pretty sure that Strava KOM would get flagged. Getting back to the science, these curing processes are logged and stored for review by the engineering depart and quality control.  Significant variations are reviewed when a process runs outside the range of curing parameters defined by the formulators in lab coats. If the part is outside the measurable quality parameters then the part is scrapped. In further expanding on the quality control aspect, pre-pregs are usually frozen or refrigerated to improve shelf life because of the way that the epoxies are mixed in a partially reacted B-stage. When pre-preg are removed from cold storage they must be thawed in a controlled environment to avoid condensation. If not thawed properly the condensation moisture would bind to the sites necessary to initiate the reaction between the epoxide and amine reducing a number of key performance measures for the system. Furthermore epoxies are also used to bond frames together. These epoxies may be room temperature or elevated cure systems, but these structural adhesives focus on achieving a high shear strength that allows the transfer of load between the joints. These bonding epoxies can come in pre-packed tubes to accurately control the mix ratio. When the two parts ,A&B, are mixed they are about the thickness of peanut butter so care must be taken to avoid the entrainment of air. Static mixers do a good job avoiding this problem. Unlike a good waffle where care is taken to keep the air in the batter.  The primary mode of loading of bonded joints is through in-plane shear or mode II seen below.

Crack opening failure modes  This mode II shear strength is critically impacted by the bonding gap thickness and is controlled by fixturing and in some cases bond line beads. These precautions are taken to avoid a kissing bonds in which the two bonded carbon parts of the frame are touching and will lead to in-use failure over the life of the product. Also open ends of cut surfaces can lead to swelling strain and de-bonding.

I could keep going on, especially with four inches of new snow on the ground and a trainer ride looming, but I think this is a good stopping point. I hope you enjoyed learning a bit about the way that epoxies are processed in bike frames. I hope that you learned how epoxy systems are significantly affected by processing. Making parts requires strict quality assurance and monitoring of the manufacturing processes. Failure to adhere to these requirements and processes will reduce the overall quality of the frame. Feel free to ask questions or share your experiences below. I check this post way too often while learning how to play the Jurassic park theme on my desk.

Why Made In The US